Speed is the new currency of business. And that’s a problem

What is the impact of technology on transformation ? Poor. I usually say that technology helps to bring speed and scale in business operations. But to operate what ? That is the questions. Digitizing a dysfunctional process or an irrelevant business model will just help you deliver mess faster and at scale.

So, as Salesforce’s CEO Marc Benioff says, speed is the new currency of business. 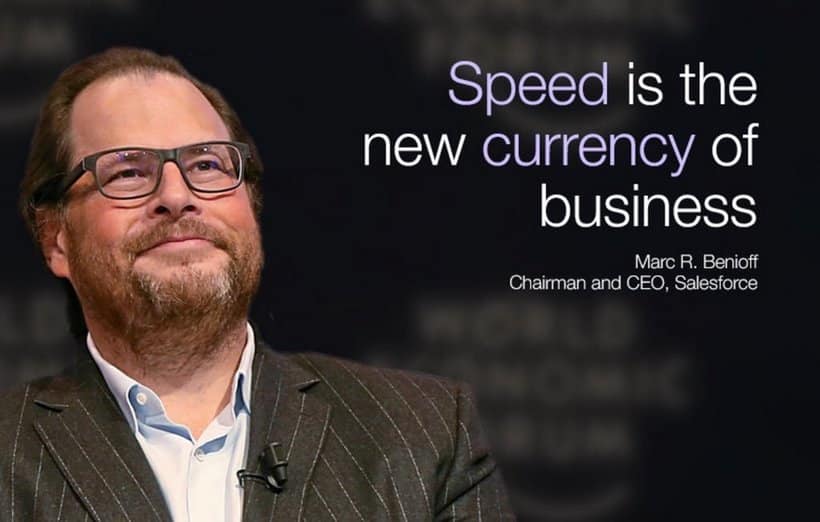 Doing IT fast is easier said than done even if as businesses are more and more getting rid of the old V-Model in favour of agility, significant progress has been made over the last years. And experience shows that the main barrier to agility is neither related to technology or methodology but cultural. Agility can be learned but, first, it’s a mindset that’s not obvious for everyone, even more after having spent 10 or 20 years working in the opposite way.

The main barrier to speed is human.

But technology does not do everything in business. Even if we’re being told that tomorrow a lot of tasks will be handled robots, humans will remain key in many operations and will never go faster than technology. My point is to discuss if people can work as fast as machines on a given task but to say that when the pace is set by machines, human-owned tasks will become our bottlenecks.

So businesses are asking humans to go faster and faster and it may come with a devastating impact.

The first consequences it the lack to time to think and make decisions. An issue businesses try to remedy in two ways.

The first is to add more and more processes to remove decision making activities and replace them by established models. But replacing judgement with rules does not work on complex issues when the human understanding of the context is key. More, it does not help employees to exercise and develop skills,Â  learn from the right and wrong they made.

The second is a pushy management approach, the revenge of micro-management. The role of the manager is not anymore to guide employees, help them understand but make decisions on their behalf, tell them what to do and how in order to save time. Here again there is no chance employees will progress with such an approach, and it’s exactly the opposite of what today’s employee expect. More than development and learning it will harm engagement, motivation and increase turnover.

Speed is the enemy of learning and creativity

My second point is about learning but i won’t elaborate more as it already appears in my previous concern. End of the “learning on job” which is the most efficient form of learning. When people can’t think they stop learning from their job.

My third point is about creativity. We all know that today creativity is key in any operating model. An important and even growing part of work is solving problems, most of times unique problems that never appeared before, what requires creativity. And creativity takes time. How much. No one knows. But what is sure is that less and even no available time for creativity is a bad news for any business.

Yes, speed is mandatory for people and organizations. The question is to what extent. How fast do we want to go and what is the price we’re ready to pay for it. I’m not sure that turning people into cogs, making the content of their work poorer and poorer is the best way.

If you design work to be done by robots so give it to robots. If only humans can do a work so, design work so that humans will be able to use what makes them different from robots.

Previous articleLinks for this week (weekly)
Next articleWhen colleagues are clients, everyone should adopt a vendor mindset