Everybody Wants to Love Their Job

The question of the relationship between employees and their work and their company remains a subject that is much in the news. It seems that the subject will be eternally topical, which would not surprise me. The latest book on the subject, “Everybody Wants to Love Their Job” by Marylène Delbourg-Delphis.

Marylène Delbourg-Delphis. His name may not tell you anything and yet… For a little over 10 years now, we have been proud to see French entrepreneurs trying the adventure of Silicon Valley, here is a woman entrepreneur who has been there for 30 years with a large number of entrepreneurial adventures to her credit, an impressive track record as a leader and, finally, a long career to create, turn companies around or advise their general management.

The eldest will remember 4D, the first relational database with a graphical user interface. That’s her. Who poached Guy Kawasaki from Apple to bring him to 4D? Well, it’s her too. Guy Kawasaki who also signs the preface of this book.

Everybody Wants to Love Their Job: Rebuilding Trust and Culture

The disaffection that employees have for their work, the distance they put between themselves and their employer, has a price that is estimated at astronomical amounts. And for many companies, moreover, the employee is almost seen as a necessary evil because they do not even think he wants to be involved.

The idea defended by Marylène Delbourg-Delphis is that, on the contrary, whether an employee wants to get involved in a project or is satisfied with a food job, no one wants to spend most of his day doing something he doesn’t like. And from this point on, the question is not so much that employees do not like their work but that companies do not know or even want to make themselves lovable. 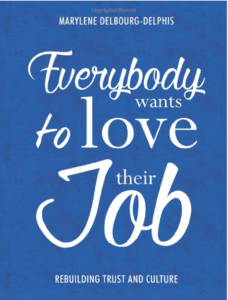 Recruitment plays an essential role in the success of a company. Talent alone is not enough, a “fit” between the employee and the company culture is needed. In the early days of a company, this adequacy is done rather well because the founders themselves take care of the first recruitments. Then they move away, abandon this part to others and casting errors multiply.

Worse, the lack of anticipation, of projection on the future often leads to recruiting what one finds and not what one needs. By filling in boxes instead of thinking in the long term, companies attach themselves to drag balls that they will be carrying for a long time.

Recruiting is good, but building loyalty is better. Why assume that your employees will want to leave you after a certain period of time? This means that from the beginning you know you won’t be able to make them want to stay. It comes back to the issue of recruitment: either you recruit the good ones and keep them must be a priority or you recruit the bad ones and it’s a recruitment problem.

In fact, context is just as important as talent. Someone who has excelled elsewhere may fail with you and vice versa and that is why you have to pay attention to soft skills and the person as much as you do to the résumé. One does not succeed alone but in an environment: colleagues, tools, processes, culture. When one changes companies, one comes alone and has to tame a new environment that, no matter how better or not, will be different.

So behind the scenes is the question of corporate culture, a recurring subject in all companies, and a subject on which many companies misunderstand. A company’s culture is not what the company says it is, it is what people experience. And when the gap between the promise and reality is too great, the employee disengages. Finally, there is no good or bad corporate culture, there are employees who believe in it or not.

Then comes the question of the sense of belonging. Here again there are intrinsic and extrinsic elements. If a startup plays on all levels and does not forget the emotional and relational dimension, does not forget to value the impact of the employee on the organization, all this tends to get lost when the company grows up and eventually ends up recruiting only people who come to take a job and do not join a company.

This naturally leads to discussions about the content of a job and what employees need to develop throughout their careers.

” Everybody wants to love their work” is a dense, very dense book. In writing the preceding lines I had the impression for once that I forgot 90% of the matter… but if I had been exhaustive this article would have been as long as the book itself.

My summary therefore does not pay tribute to the richness of the book, the diversity of the themes covered and the very concrete examples that illustrate it. And for once it is not a consultant’s book but an entrepreneur’s book: these are the words of a person who has lived and experienced what she says, not one who gives an opinion from the outside.

Recruit, evaluate, hire, train, role of leaders, need for a Chief People Officer and so on. For a company manager or a manager there will not be a subject that he cannot say “ah that’s a good point”, “it’s not stupid”.

She does not use the term “employee experience” but I find in it the way I see it: not side benefits that make the pill easier to swallow but a set of mechanisms at work throughout the employee’s journey, endogenous and not exogenous to the workplace.

Marylène Delbourg-Delphis often takes the example of startups and that’s normal: that’s where she has spent most of her life. But that doesn’t mean that what it says doesn’t apply to a large company, quite the contrary. Any large company that has the problems that we all know has, at one time, been a small company where everyone was motivated and committed. By explaining what in a company’s growth mechanism causes human infrastructure to deteriorate almost mechanically, it gives growth companies the keys to prevent this from happening and gives big companies the real causes of their pain, as long as they really want to tackle the root causes.

In short, contrary to what the title might suggest, “Everyone wants to love their work” is not yet another inspiring book on the reenchantment of work, written by care bears for care bears. It is an entrepreneur’s book that has understood to what extent human infrastructure, like technological infrastructure, determines a company’s ability to succeed over time. It is pragmatic, illustrated, meaningful and never loses the reality of what the company is and its objective. It is also a tech entrepreneur’s book that has understood the importance of HR and the fact that you always have to learn about yourself and others even when you are at the top of the pyramid, even when (and especially when) everything works.

In the end, it shows, a lucid but still iconoclastic point of view for some, that the problem in the company-employee relationship is only rarely on the employee’s side and refers companies and leaders to their responsibilities. But with concrete courses of action other than good conscience and pious wishes.

Not an inspiring book, not a theory book, not a research book, not a management or entrepreneurship book… it’s a UFO that is a bit of all this and I highly recommend reading it.

Photo : I love my job de iQoncept via Shutterstock